This vision was started by Elder Willie and Annie Green in 1979. 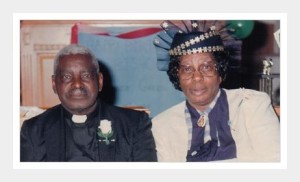 With God leading him, Elder Green began to search for a place to establish a church and bring God’s people together. He knew that a lot of preparation had to be made, but he recalled the word of Jesus as he said; Upon This Rock I Build My Church. So he just put his hand in God’s hands and had faith that God would be by his side in preparing to build his church.

In 1980, Elder Green was led to a road where he found two abandoned buildings. He knew the building would require a great deal of work. But he knew he was not alone, he had faith in God and he knew that God would make a way out of no way. So he gathered his family together and they began working, soon others began to join in. In July 1980, we were able to dedicate the building to the lord. Since that blessed time God has been blessing this spiritual temple.

In 1981 the Church family began to grow we added thirteen new members and we were also blessed with an Assistant Pastor Willie James Green. In 1982 we were blessed with two more new members and one minister. The church has also accumulated many friends by this time. In this year of 2003 another church was added to the body. Holy Temple Holiness Church, were Bishop Kenneth Smith is the Pastor along with his two missionary. Also in 2003 God has bless Mt.Moriah with three new ministers. In 2019 God is still blessing us in so many wonderful ways and we give him all the praise. We don’t believe he brought us this far to leave us.