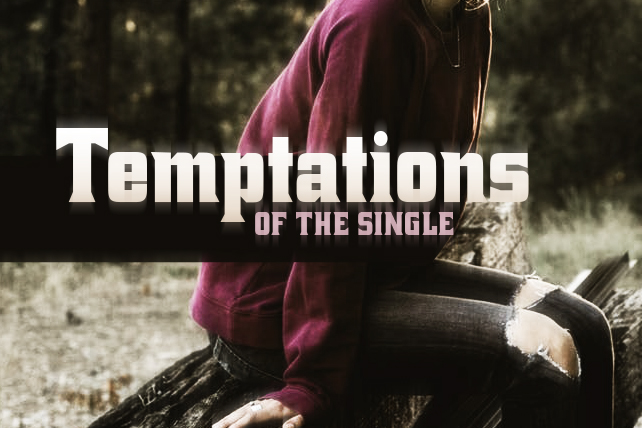 One of the most important decisions a person will ever make in their life is the decision about whom we will marry. In marriage, hopefully, we grow in our ability to love each other and in our ability to face the challenges in life. Dr. Neil Clark Warren, author and founder of eHarmony, has said that the quality of the person you choose can account for up to 85 percent of whether the marriage will work or not.

Starting your marriage with a person who is a good fit for you and has similar values as you do is huge. This decision of selecting your life teammate can impact so many other areas of life. It has an impact on your faith, your career, your friendships and your happiness.

A few years ago Pastor Perry Noble wrote a blog about temptations of single people and I liked the way that he addressed some of the thoughts about this important selection process. He presented them as “temptations” temptations that he called a distraction to God’s best. His thoughts inspired me so I decided to write about the topic.

This one is perhaps the biggest temptations singles face. There is a fear that we cannot get the best person for us while keeping high standards, so we begin to compromise on what we once thought was important. Watching single people we know and love make concessions on their faith, their values or their life standards is disturbing.

Women, if you are looking for “Mr. Right” don’t settle for “Mr. Right Now.” Sometimes, women in particular think that if all of her friends are getting married and she is not, then she should lower her standards. Men are often tempted to dismiss important values when he is attracted to a beautiful, attractive, sexy young woman. Her character becomes secondary. But believe me, her character will be what makes or breaks the relationship.

Remember this: Jesus never asked His followers to compromise their faith or integrity, but he does ask us to be willing to endure criticism for speaking and walking in His truth.

People, if you are constantly defending the person you are dating, then you are probably compromising on something.

“Ladies…if he is not pursuing you in a godly manner (which means he is not constantly trying to stick his hands down your pants) then drop him!” Perry Noble

Marriage is a magnifier. Most problems you face now, you will continue to face in your marriage, sometimes even more. If the issue is a small thing when you are dating, then please know that it will become a significant issue in your marriage.

Don’t disregard the problems in each other’s attitude or actions. Since we all have issues, pay attention to their level of humility and willingness to change. Remember, the Bible says “you will know them by their fruit,” not their promises. When dating, it’s best to deal in reality, not potential.

“When you know, you just know,” said a celebrity who was en route to their fourth marriage. She looked so sincere and believable when she said this. It’s what we all want to believe. But obviously her track record raises some questions about what she “knows and doesn’t know.”

Anyone can fool anyone for a short period of time! You need to date someone “until the new wears off”! If two people are in a hurry to get married, then it often involves trying to hide something from the other person…or maybe just because they want to have “God-endorsed sex”!

The best decision you can make is to date for at least one year before deciding to get married and probably two years total before the wedding.

“Before you marry a person, you should first make them use a computer with a slow Internet so you can see who they really are.” Will Ferrell

4.  Asking for Advice From the Wrong People!

When you want marriage or dating advice, go to people who are actually married, happy, and have been for 10 years or more! Don’t rely on the advice from people because they read a book or because they know some Bible verses. If you want to know how to have a successful relationship, ask people who have one. Books are still good though, if you’re the one reading them. My friends Dr. Jim Burns and Doug Fields have written a great book, Getting Ready for Marriage, that is one of the best books to read in preparation for marriage.

What other temptations do you think single people face? What have you personally gone through that has felt like a distraction? How can We be praying for you?